Tachycineta thalassina
Passeriformes
Members of this diverse group make up more than half of the bird species worldwide. Most are small. However their brains are relatively large and their learning abilities are greater than those of most other birds. Passerine birds are divided into two suborders, the suboscines and the oscines. Oscines are capable of more complex song, and are considered the true songbirds. In Washington, the tyrant flycatchers are the only suboscines; the remaining 27 families are oscines.
Hirundinidae
Swallows are small, graceful birds with long, pointed wings, tiny bills, and small feet. They eat flying insects and forage over open water or ground. Many are well adapted to living near humans and use man-made structures for nesting. Swallows make their nests out of mud attached to a structure, or build in sandy burrows or in available cavities. Most swallows are social, foraging and migrating in flocks; many nest colonially, but a few are solitary. Most are monogamous, although extra-pair copulations are common in many species. The males of some species help incubate the eggs while others do not. Both parents provide care for the young. All North American species migrate.
Common summer resident.
Source of Bird Audio

This western species is often associated with coniferous forests in mountainous areas, but in Washington it uses a variety of habitats. Young forests, clearcuts, prairies, wetlands, open water, and even cities are all used by Violet-green Swallows. This is the swallow most likely to be seen in urban areas within Washington's forested zones. Violet-green Swallows are often found at forest edges with large snags or other cavities for nesting. In late summer they are common at high elevations. During migration, they are often found near water, and in early spring, many remain near water and do not disperse to their breeding areas until the arrival of consistently warm weather.

These social birds are often found in flocks of mixed-swallow species and in single-species flocks. They are highly acrobatic and forage almost exclusively in flight. Their flight is more fluttery than that of Tree Swallows, and they often fly higher than other swallow species. They will, however, feed low over open water, especially in bad weather.

Violet-green Swallows nest in tree cavities, cliffs, buildings, old woodpecker holes, and nest boxes. Originally, they probably nested in rock crevices and tree holes, and although they now take advantage of man-made structures, they do not take as readily to nest boxes as do Tree Swallows. They nest in isolated pairs or small colonies of up to 25 nests. Both male and female build the nest, a cup of grass, twigs, rootlets, and straw, lined with feathers of other birds. The female incubates four to six eggs for 14 to 15 days. Both adults feed the young, which leave the nest after 23-24 days. The parents continue to feed the young for some time after they leave the nest.

Violet-green Swallows arrive early in spring, especially in eastern Washington, and are one of the first returning migrants. After a post-breeding migration to higher elevations, they leave for the winter. Some winter on the southern California coast, but most winter in Mexico and Central America. Two waves of migrants can often be detected, birds that have bred in Washington leaving the state in late July or early August and breeders from farther north (including many immature birds) passing through in late September. They migrate in flocks, often traveling along ridges and major rivers.

Violet-green Swallows have increased significantly in Washington since 1966. They may have benefited from an increased supply of artificial nest boxes, although they must compete with European Starlings and House Sparrows for them. Their ability to use a variety of habitats and the fact that they can nest successfully in cities and towns should help the population remain stable.

Violet-green Swallows are common throughout Washington in appropriate habitats from mid-March to early September. In some places, including Yakima County, they return as early as late February. They are less common, but can still be seen, through the end of September. During fall migration, thousands collect in south-central Washington (Klickitat County). 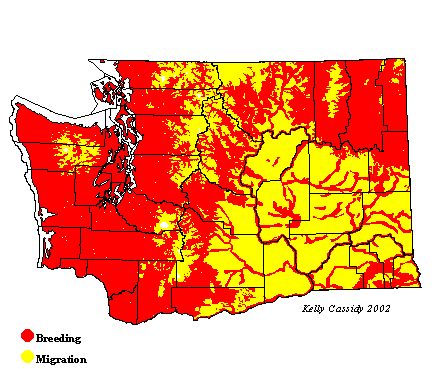