Colinus virginianus
Galliformes
This group, the "chicken-like" birds, consists of medium to large terrestrial birds. They are quick flyers, better adapted for short bursts of speed than sustained flight. They are fast runners and spend much of their time on the ground. Washington has two families:
Odontophoridae
Similar to their larger cousins, the grouse, members of the quail family are mostly non-migratory, ground-dwelling birds. Most inhabit early-successional brushy areas. Omnivores, quail eat mostly vegetative matter in winter, and switch to invertebrates in the summer. Pairs are typically monogamous. In the non-breeding season, small flocks called "coveys" gather together. The young are precocial, able to walk about and feed themselves almost immediately after hatching. This enables quail to have large clutches of young.
Rare resident west
Source of Bird Audio

A round-bodied, ground-dwelling bird, the Northern Bobwhite was introduced into Washington from the eastern United States. Highly streaked and cryptic, the Northern Bobwhite is patterned in shades of brown varying from rufous, to chocolate, to tan. A light-colored throat and eyebrow band are distinctive marks. This is the only quail in Washington that is uniformly streaked in brown. Males and females appear similar, but males have less streaking on their breasts, and their eyebrows and throat bands are white instead of tan.

In non-breeding seasons, Northern Bobwhites congregate in coveys of up to 20 birds. During the breeding season, they flock in smaller family groups. As they often stay amid dense cover, they are more often heard than seen. Like most quail, Northern Bobwhites travel primarily on foot, although they will fly short distances when disturbed, often with an explosive takeoff. At night, members of the covey roost on the ground in a circle, tails inward with their heads pointing out.

The male and the female choose a nest site on the ground in dense brush, and both help build a shallow depression lined with grass and leaves. They often weave other materials into an arch over the nest, resulting in a well-hidden entrance. Both sexes incubate a clutch of 12-16 eggs. Shortly after hatching, the young leave the nest. They are tended by both parents, but feed themselves.

Three subspecies have been introduced in Washington, with the first introduction probably on Whidbey Island in 1871. They formerly occurred in southeastern Washington, where they were introduced into Walla Walla County in 1920. This population has declined dramatically in recent years, and the last sighting was recorded in 1988. Introductions were made into the Wenas Creek area, but attempts to establish a population there have failed. Bobwhites are continually introduced into agricultural and low-density development areas throughout the state for hunting.

A few Northern Bobwhites can be found in the Puget Trough in grassy habitats, especially in the prairies of southern Puget Sound, where they are established locally. Elsewhere, frequent introductions make their distribution difficult to predict. It is possible to see them anywhere in the state in appropriate habitat, although almost never in the same place from one year to the next. 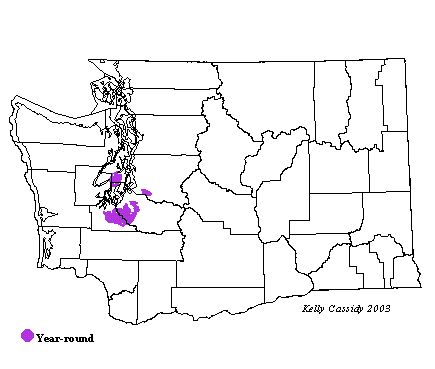